Bachelor of Arts in History

The BA with a major in history requires 31 semester hours in history courses, which include the following:

Must include three (3) different geographic regions from:

Students who declare the major beginning with the fall 2020 semester must take HIST 20003 - The Historian's Craft, preferably in freshmen or sophomore year.

Majors must take one History Major Seminar (49903), preferably in the junior year. Prerequisites for the HMS are junior or senior standing and at least 15 completed hours in history. Seminar topics will vary by instructor, but always center on an original research project based on primary sources. The HMS carries WEM credit.

Students who declared the major prior to fall 2020 choose three (3) classes. May be upper level or lower level courses.

Students who declared the major beginning fall 2020 or after choose (2) classes. May be upper level or lower level courses.

A maximum of 15 hours in any one geographic area may be counted towards the requirements for the major.

Please note: We make every effort to keep this information up-to-date, but always consult the current TCU catalog for the most recent and accurate information on all requirements.

The minor in history requires 18 hours, to be distributed as follows:

History majors who plan to pursue departmental honors must be members of the Honors College and should enroll in HIST 30153 during their junior year and HIST 40103 during the fall semester of their senior year. They may, with the approval of the adviser, substitute the History Major Seminar for the Juniors Honors Tutorial (HIST 30153) as preparation for completing the honors thesis. 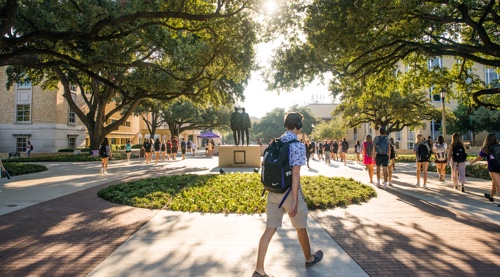 Find Something That Inspires You

Explore our courses to find subjects you're passionate about.