Open the door to the French-speaking world.

Learning French opens the door to many countries in the world such as Canada, Senegal, Cameroon, Belgium and many more.

Develop your competence in the French language through diverse coursework in language, culture and literature, emphasizing the four areas of language acquisition: speaking, reading, listening and writing.

Your understanding of the French language will cover a broad reach throughout the world—from Louisiana and Québec in North America to South America, Europe, Africa, Asia and Australia. Our interdisciplinary approach will allow you to dive into the limitless connections that exist among French and all disciplines of the liberal arts through a great variety of courses in geography, art history, theatre, music, political science or religion.

A Major in Modern Languages with a concentration in French offers several exciting semester or summer study abroad opportunities that will boost your proficiency in the language, as well as open your eyes to new people, new places and new ideas. Our top French students are invited to Pi Delta Phi, the National French Honor Society.

We also offer many opportunities outside of class for you to expand your language skills:

Majoring in Modern Languages with a concentration in French opens up a multitude of career paths. Mastery of French and an understanding of the culture in French-speaking countries will prove essential in careers in interpretation, translation, teaching, travel and cuisine. Other fields in which French is useful include art, medicine, nursing, international nonprofit organizations, finance, diplomacy, cinema, technology, engineering, pharmaceuticals, international business, international law and fashion. 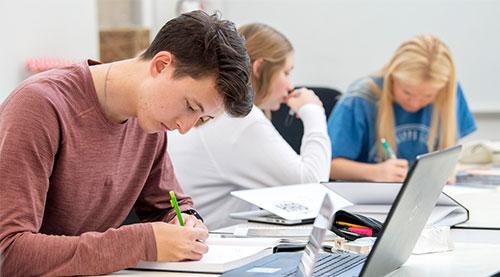 Open the Door to a New Culture